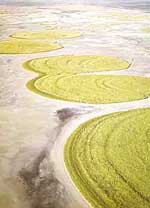 The lesser-known Makgadikgadi Pans National Park is situated roughly halfway between Maun and Nata on the Francistown road in northern Botswana. A modest looking turnoff to the park’s main entrance can be found 160 kilometers east of Maun and 45 kilometers west of the small village of Gweta, which has the nearest lodge accommodation, fuel and supplies.

Makgadikgadi Pans – From turning off the main tar road, 8 kilometers of rough gravel road leads to the park entrance gate, where entry fees are to be paid. All roads within the park are rough and in many cases very sandy, so it is essential to have a 4×4 vehicle. It is also wise to carry water and travel in tandem with a second vehicle, as, if there should be a breakdown deep within the park, it may be a long wait before any other vehicle is likely to come along to assist.

There are two camping options within the park available to visitors. The first is Njuca Hills, traditionally spelt Njugha, where two camping sites overlooking the vast open plains, undeveloped except for two pit latrines, afford visitors the opportunity to witness large migrations of zebra and wildebeest during the onset of the rains. Njuca Hills are situated 26 kilometers south of the main entrance gate and it should be noted that no water is available at this site, so campers must be totally self-contained.

The other option is the public camping ground at Kumaga, 48 kilometers southwest of the main entrance, situated on the banks of the Boteti River across from Kumaga village. This site, which is also an alternative entry point to the park, is provided with an ablution block and water standpipe. Water here, which is supplied from a borehole, has a particularly unpleasant sulphur smell when first drawn, but improves if left to stand. However, it is advised that water for drinking purposes should be brought. Limited basic food supplies can be obtained in the Kumaga village. Kumaga derives its name from a pool near the village that contains edible tubers.

The Boteti River, once a broad strong-flowing waterway fed by waters drained from the Okavango during the months of June and July annually, later dwindling to a chain of pools, last ceased flowing in September 1992. The last few deep permanent pools that remain are competed for by humans, livestock and wildlife, causing considerable conflict. It is hoped by all that the present drought cycle will soon be broken.
View a larger Makgadikgadi Pans National Park map.

Makgadikgadi, the name of which implies a vast open lifeless land, is not without its folklore. There are stories of people setting out from Gweta to explore the land that lay between them and the Boteti River to seek a favorable environment in which to settle. They entered these great thirst lands at the driest time of year, drawn by what they perceived as large lakes of sparkling water on the horizon. Suffering badly from thirst, the lakes kept drawing them hurriedly on in their attempts to reach the life-giving water that always remained just ahead of them. Gradually, one by one, they fell and died.

But Makgadikgadi is not always dry. The pans, which are situated in half the south, east and northeastern areas of the park, fill with water during the rains from mid-November and mostly retain their water into April or May. The “thirstlands” are then transformed into great sheets of water, which attract a spectacular array of waterbirds and trigger dramatic migrations of wildebeest and zebra. It is unfortunate that this huge water spectacle becomes practically inaccessible by road at this time, but anyone fortunate enough to fly over the area during the wet season sees a water wonderland of incredible scenic beauty.

Makgadikgadi was initially state land. People have never been resident in its water-less interior, but in times of drought, surrounding villagers were permitted to graze their livestock within the area, withdrawing them to their homes when conditions improved. The area was declared a game reserve in 1970 and in December 1992, the boundaries were extended and National Park status was attained. The present park covers some 4,900 square kilometers.

Here, as with all parks and reserves, the use of an anti-malarial prophylactic is strongly recommended and, when traveling within these areas, a 4×4 vehicle, carrying emergency water and food, is necessary. Engaging 4-wheel drive before negotiating sandy patches not only minimises the possibility of becoming stuck, but also saves chewing up the road surfaces for others.

Both dry season and wet season visits to this park are recommended in order to witness the dramatic appearance of the pans at their driest and to experience the transformation to a water wonderland, and see the wildebeest and zebra migrations, in the wet season. Linking a few days in Makgadikgadi with a similar period of time in its nearby sister park, Nxai Pan, will give visitors a distinctly different experience. Makgadikgadi – a vast wilderness of space and timelessness.