Things to do in Johannesburg

Top things to do in Johannesburg

There are a multitude of things to see and do in the city of Johannesburg, or the City of Gold as the locals call it. This modern day city offers visitors entertainment and attractions to suit any taste or budget.

Grown from a small mining town astride the worlds richest gold reef, Joburg has grown into a major tourist attraction offering a gateway into the cultural and wildlife experiences of South Africa. Visit some of the many art galleries, cultural institutes and studios or alternatively take in a show at one of its many theaters in Johannesburg.
We have put together a list of the top attractions in Johannesburg as well as the surrounding area and Pretoria.

2. Make the pilgrimage to the dawn of humanity – Sterkfontein Caves
An hour’s drive from Joburg, the Sterkfontein Caves are world famous for their fossil finds and is designated a World Heritage Site. Among the discoveries you will find “Mrs Ples” and “Little Foot”, an almost complete skeleton dating back 3 million years! Maropeng, Cradle of Mankind & Sterkfontein Tour

3. Tour the Soweto Townships
Soweto was the centre of political campaigns that culminated in the overthrow of the apartheid state. Soweto is best experienced on a guided tour, which provides an insight into the struggle of the black South Africans during the apartheid era.  Soweto Day Tour

4. Learn about gold mining or ride a roller coaster at Gold Reef City
More than just an amusement park! Gold reef city was built around an old gold mine and retains its Victorian style with a reconstructed village. Today visitors can take a trip down a working mine shaft and get a first hand experience of how the precious mineral was mined back in the day. Golf Reef City 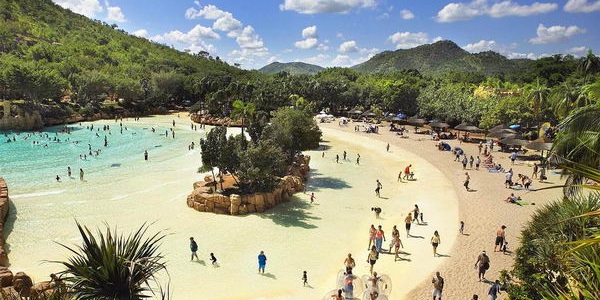 5. Safaris, Golfing & Waterparks at Sun City & Pilansberg Game Reserve
2-3 Hours drive from the city, there’s nothing quite like it anywhere in the world. The Sun City is a famous casino and resort built in 1979 in an extinct volcano that is a wildlife game reserve today and remains one of South Africa’s biggest tourist attractions. It offers activities for families and getaways for honeymooners in a truly African ambience. Sun City Day Trip

6. Shop at some of the country’s best malls
Rosebank has a variety of malls, as well as a flea market selling African art, curios and handicrafts. Sandton City’s range of boutiques and shops offer a wide selection of designer brands.  One of the most popular malls is the Nelson Mandela square, a hub for the top trendy shops and restaurants in the city.

8. ‘Africa’s Greatest Eating Experience’ at the Carnivore Restaurant
Crocodile steak anyone? This restaurant serves up a truly wild array of gastronomic delights. Make your selection from Kudu, Crocodile, Ostrich and Blue Wildebeest amongst others, meticulously prepared to perfection. Patrons will sample some of the best game dishes that South Africa has to offer.
The Carnivore Restaurant (Lunch/Dinner)

9. Get up close with the king of the jungle at the Lion Park
Nowhere can you get closer to a pride of Lions and other animals and still be completely safe. Visitors can join a group or self drive through the park. The Park not only houses lion prides, but also many other predators and including wild dogs, cheetahs and hyenas. The park also offers the opportunity to play with lion cubs. The Rhino & Lion Park Tour

12. Magaliesberg Canopy Tours
An hours drive outside Joburg, an eco adventure that takes you through the second oldest mountain range in the world. Take a zipline tour through the tree tops up to 140 meters long and 30 meters above the canopy floor.

13. Hot Air Balloon Excursions
Take to the skies in a classic hot air balloon for a unique perspective of Africa. Sip on some fine champagne as you hover over the beautiful scenery below. Trips can be booked over the Cradle of Humankind as well as a balloon safari. Hot-Air Ballooning Excursion

14. De Wildt Endangered Wildlife Centre
Established in 1971, previously known as the De Wildt Cheetah Centre it has recently been changed to The Ann van Dyk Cheetah Centre. Their mission is to ensure the survival of the Cheetah, African Wild Dog and other wild animals in southern Africa, that was in the brink of extinction. De Wildt Endangered Wildlife Centre.