A full day Sightseeing Tours in Cape Town, exploring the wonders of the entire Cape Peninsula, from the pristine beaches to the iconic Cape Point, where two oceans meet.

The Cape Peninsula Tour takes us to Clifton & Camps Bay, some of the most popular beaches in Cape Town, awarded rge Blue Flag status. We travel to Hout Bay, a small fishing village, known for it's fresh seafood, bustling markets and restaurants. Here you will have the option to take a boat trip to Seal Island, where thousands of seals inhabit a tiny island offshore.

Cape Point Nature reserve is a the highlight of the trips, home to Cape Town's most famous landmarks. Situated at the very tip of the peninsula, Cape Point separates the Indian and Atlantic Ocean in South Africa.

Passing through Simons Town, a charming coastal town and seat to the SA Navy, here you will find a thriving harbour, toy & navy museum as well as the popular Boulders Beach, home to a penguin colony.

We pass through Muizenburg, a well known surf spot on the way to Kirstenbosch Gardens, where we will become enchanted by the rich smells and sounds of the luscious forest.

*Orange Wi-Fi on board 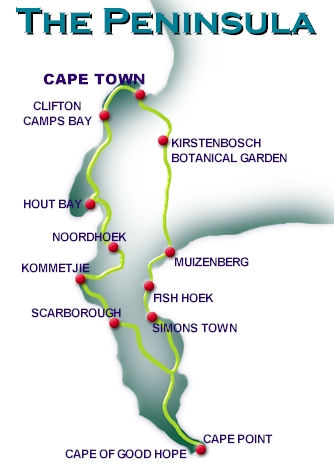