Botswana is one of few countries in Africa that was never colonised, although it was a protectorate of England. It has one of the lowest population densities and some of the largest remaining herds of wildlife in the world. Due to the discovery of rich diamond mines in the middle of the 20th century, Botswana changed from being one of the poorest to one of the richest countries in Africa. It is a vast open arid country, well-known for the Okavango Delta, the biggest delta in the world, rich in the diversity of fauna and flora. Many Botswana national parks are found within the country and although expensive, it gives the visitor a unique opportunity to enjoy a safari without meeting the hordes of tourists that other countries are famous for. It is also in Botswana where one can still see traces of the Bushmen, the desert dwelling nomads that survived with bows and arrows throughout the centuries.

Botswana is landlocked between Namibia in the west, Angola and Zambia in the north, Zimbabwe in the east and South Africa in the south. Most of the countryside, excluding the hilly eastern and north-eastern areas, is broad, flat and arid landscape, known as the Kalahari. In the north-western part, the Okavango River disappears into the sand as it forms various river arteries into what is known as the Okavango Delta in Botswana, the largest inland delta in the world. Throughout the country various pans, or huge shallow salty depressions, void of any life, can be found. These fill up with water during the rainy season and gives sanctuary to many birds and animals.

The hot summer is between October and April and this includes the rain season that normally runs from December to March. During the rainy season (accompanied with thunderstorms and high humidity) it can be very difficult to see game as the grass can grow taller than any vehicle and tracks in parks can get quite muddy. Many of the camps in the reserves are closed from December to March. The cooler and dry period is from May to September with dust storms during August and very cold nights. This is the most popular time to visit, especially in June. In the south of the country it rarely rains.

All major foreign currencies (travelers’ cheques and cash) will be exchanged by banks, forex bureau’s and certain luxury hotels in the bigger towns. It is, however, advisable to bring along currencies in US Dollars or British Pounds to minimise costs on exchange rates and commissions. Credit cards including Visa, MasterCard, American Express and Diners Club acceptance is limited. Foreign monies need to be declared when arriving and export is limited to the total that was declared on arrival.

Accommodation in Botswana is relatively expensive. Luxury hotels can be found in the bigger towns including Maun, Gaborone, and Francistown and luxury lodges can be found throughout the bigger national parks. Camping is available in all the towns and game reserves, but nothing prevents one to drive into the bush to camp. This should be done with caution though.

For more information on accommodation contact the Hotel and Tourism Association of Botswana in Gaborone.

Food is generally available in various supermarkets and meat (especially beef) is extremely cheap compared to neighboring countries. Care should be taken with water and it should be either filtered or boiled.

There is some intricate greeting behavior in Botswana. It is expected that the eldest person or those with higher status will greet others first. Therefore when entering a shop, greet everyone first. Be aware of and respect local customs. Do not wear army or any camouflage clothes (single coloured khaki is fine though), but rather wear comfortable clothes. Be sensitive to the local population when photographing and ask permission first.
Although tipping taxi-drivers is not common, a 10% tip can be given to waiters and a pre-agreed sum to guides. 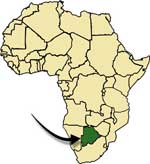 For more information on tourism in Botswana, contact: Department of Tourism Ministry of Commerce and Industry, Private Bag 0047, Gaborone.

There is some diplomatic representation in certain countries of the world including:

A passport (valid for at least 12 months after intended period of stay) and a Botswana visa are required for some nationalities as well as tickets and documents for return or onward travel. An International certificate of vaccination for yellow fever is required if arriving from infected area within 5 days.

To mention all the attractions and activities will be impossible in such a short limited space, but be sure to return to www.getawayafrica.com in the very near future for an in-depth coverage of all the treasures awaiting your arrival.

Most of the activities in Botswana revolve around visiting the game parks or some of the most remote areas in Africa, trying to get away from the hustle and bustle of the city life. The towns have not much to offer except to stock up before heading into the bush.
Cities and Towns:

Gaborone
Gaborone is the capital of Botswana with very little to offer to the tourist except for an overnight stop to some other parts of the country. There is an interesting weaving and craft center at Lentswe-la-Odi, just north of the town.

Maun
This outpost on the edge of the Okavango Delta forms the gateway to delta. Here one can arrange safaris into the various national parks, a flight into the delta or just relax at one of the hotels after returning from an excursion into the bush paradise. It is important to make reservations at the parks board for entry and accommodation in the Moremi, Savuti and Chobe National Parks, otherwise you will be turned back at the gates to the reserves.

Tsodilo Hills
Tucked away in the north-western corner of Botswana, one finds the Tsodilo Hills. Centuries ago they were mined and used by the Bushmen, who left behind some of the world’s most fascinating rock art. Some 2000 paintings portraying animal life can be found scattered around the four hills. To reach these hills, 4×4 vehicles are a must from Shakawe in order to navigate through the thick soft sand and the visitor must be 100% self-sufficient as there is no water or camping facilities. One can join a safari from one of the tour operators in Maun. Some of the paintings can be seen easily and some of the more vivid paintings require a climb. Take enough water along, as it gets very hot in this area and dehydration is a definite risk.

Botswana follows a policy of keeping visitor totals low and entry fees high. Although it is not a country to travel if on a tight budget, one will not bump into hundreds of other travelers. One will be able to enjoy the solitude of a wonderful raw African country under quiet skies. Only 4×4 vehicles will be able to navigate the deep sand and often muddy tracks.

Okavango Delta
The Okavango River starts in Angola and in prehistoric times flowed towards the Atlantic Ocean. Due to a landslide in the north western part of Botswana, the river changed its course and now flows “backwards” to the interior before dispersing into various channels and rivulets and is eventually swallowed by the huge expanse of sand. One can arrange for a flight from Maun over this huge area stretching out like a hand with spread fingers and watch animals including buck and elephant grazing on the numerous islands. It is also possible to fly to the various game lodges situated deep within the Delta, using this as a base for excursions into the heart of the delta. Experience Africa at its best by using a mokoro (dugout tree trunks used as canoes) and a guide, to glide softly between papyrus plants, lilies, and huge palm trees watching a fantastic variety of bird-life, hippos, crocodiles and other animals coming down to the water to quench their thirst. Transition to night is blessed with a red and golden sunset as the sun hugs the earth behind the silhouette of palm trees reflected in the peaceful waters. It is highly recommended to go on guided hikes through the park. Most lodges offer luxury accommodation although some cater for cheaper tent accommodation.

Moremi Wildlife
Reserve Situated in the north east of the Delta, this park offers the ability to discover the reserve and its wildlife from the comfort of a 4×4 vehicle, a relaxing cruise with a mokoro or by motorised boat. There is a variety of wildlife including leopard, lion, buffalo, giraffes, wild dogs (although very scarce), elephant and many antelope species. The best of the park is the wide collection of more than 500 different bird-species. Luxury lodges, some with exceptionally good locations and service, and rustic campsites offer accommodation.

Chobe National Park
Home to more than 10 000 elephants, Chobe will leave every visitor astounded with the magnitude of Botswana’s beauty. It covers a huge area of swamp and grasslands of more than 10 000 km2 and sitting at dawn watching herds of hundreds of elephants emerging from the nearby woodlands to drink from the Chobe River is an exhilarating experience. Join one of the various sun-downer boats to see the animal life visiting the river at sunset.

Makgadikgadi and Nxai Pans
These barren landscapes with the surrounding grasslands and huge baobab trees are meant for the visitor that seeks solitude and quietness. The pans often stretch from horizon to horizon, establishing itself as some of the biggest in the world. Visit Kubu Island to experience the eerie silent landscape.