“Safari”, the Swahili word for “Travel” originated in and rightly so in Kenya. This is the world’s capital of game parks, hordes of wild animals and a variety of natural scenic beauties. The country’s tourism industry forms Kenya’s biggest revenue, with the 2011 enormous spending and investments from foreign countries like China, United Arab Emirates and India that has been filling up the fall by fewer tourist visits from the normal European markets. With the previous years of political instability, Kenya’s visitors are over the years still treated warmly at heart from the majority of citizens.

There are more than 40 conservation parks to explore in Kenya. Major tourist attractions are the annual migration of millions of antelope like wildebeest and zebras crossing the Mara River while searching greener grazing’s, by far the best adrenaline behaviors by animals happening annually between the Serengeti National Park in Tanzania and the Maasai Mara National Park in Kenya, from the months June and September.

Kenya has a proud collection of cultural heritage and places of interest, like colourful tribes, long stretched sandy coastlines, Indian ocean coral reefs, snow-capped mountains and familiar islands. A birding paradises with lakes covered by flamingos and other aqueous birds and extinct volcanoes.

The country’s borderlines divide neighbours like Tanzania on the southern regions, Uganda on its eastern side, Sudan edges on the north-western border while Ethiopia is located on the northern side. On the eastern Kenyan borders, you’ll find the country Somalia who’s sharing the warm Indian Ocean coastline of Africa in the south-eastern parts. The land has a rich natural diversity that obviously hard to come-by. Strapped by the Equator the country has no winter or summer season while the low coastal plains ascend to form part of central highlands that are naturally divided by the Great Rift Valley. Kenya north regions consists of arid flat savannahs and shoal salt lakes,  rising to meet the higher grounds. To the west of the country, the land drops slowly to meet Lake Victoria, the source of the Nile river.

Kenya has tropical temperatures, on its coastal regions, visitors find it hot and humid with strong monsoon winds. The low-lying northern in-land is very dry and hot, while the plateau area around the capital city Nairobi is more pleasing due to its elevation. The largest part of the country experiences heavy rainfalls from March to May while light rains from October to December months. The best time of the year to visit the country is during the dry and warm season between June & September, perfect seasons for outdoor activities. Average temperature’s for Mombasa are 30.3 °C max & 22.4 °C min , Nairobi – 25.2 °C max & 13.6 °C min, Lodwar & north plain-lands- 34.8 °C max & 23.7 °C min and Eldoret – 23.6 °C max & 9.5 °C min 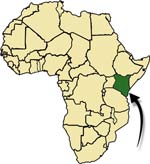 Fleece, light weighted cotton clothing can be worn most of the year around, while khaki coloured clothes with a windbreaker are suggested for game viewing activities, because of wild animals attractions to certain colors. We advise warm clothes for the cooler day-breaks and evenings along the coastline. Rain jackets are extremely important to take along during the rainy months.

Still fresh in the mind, Kenya has undergone political unrest in the large towns, tourist are advised not to take part in any of these grievances as governmental punishment can be severe while looting done by rioters is from time to time part of political events. The inter-ethnic hatred can be at uninhibited manner and unforeseeable, luckily these type of up-rises normally occur away from main tourist destinations. Regions that should be traveled by caution are the eastern coast, north of island Mombasa (due to ethnic tensions), please stay away from the borders of Somalia (armed robbers and pirates) and the city of Nairobi with a tendency of street mugging. Tourist must not travel during night-time due to bad rugged and muddy roads, wonder of animals and small or large transportation driving in darkness.

The major foreign currencies (travelers’ cheques and cash) are accepted, but the best currencies are US Dollar, British Pound, and French Francs. Credit cards are accepted in the major hotels and some tourist businesses. Our advice is that under no circumstances should the black market be used for money exchange. The police will arrest you if even if they only suspect you of participating in illegal money exchange and con-artists will rob you.

Kenyan accommodation includes worldwide renown hotel brands, luxurious tented holiday resorts, comfortable lodges, hostels, and campsites. Cuisine in the country is top rated while its including awesome game meat, seafood specialties, healthy tropical fruits, freshwater fish dishes and other local delicatessen. A large number of restaurants to be found in cities with Indian and Arab dishes on the menu. But tourist venue’s are prepared with internal dining area’s from bed & breakfast to fully inclusive services, while menus include locally produces tea, coffee, and beer.

Kenya was under the territories of the United Kingdom and because thereof the British influence is still deep adjective and Western tendency predominate. Locals are dressed is normally informal on most occasions. Photographing people in Kenya is a susceptible issue, the Masai use the opportunities to make their days living out of photo shoots, and permission to shoot must be asked. Muslim women photographing are forbidden. Tipping is normally not included in prices and will be well appreciated. Drugs is a serious crime in Kenya and jail sentences for these activities can be expected.

International passports are valid 6 months beyond intended stay while visas are required for most tourist to the country including tickets or documents for return or further traveling needed. Visas should be secured before travel, while airport visas can be requested (be warned delays might be expected for these visa services). Proof of yellow fever immunization may be requested. Airport departure taxes (in hard cash) is payable upon departure from all Kenyan airports.