Mozambique has been marked one of poorest countries worldwide, however, tourists love Mozambique with gigantic provocation ahead to retrieve stability, food, and well-being of the Mozambican citizens coming out of a 17 years a disastrous civil war. This previous Portuguese colony is still a beautiful holiday makers paradise, with some of the best Indian Ocean beaches, coral reefs and turquoise waters on its continent.

However, as we speak, Mozambique is still being redeveloped and its tourist industry has begun to grow. Holiday resorts are built along a spectacular coastline, while some islands have lodges with picturesque surroundings of crystal clear waters, palm trees, and isolated sandy beaches.

Mozambique is located in the Southern part of Africa while bordering Tanzania on the north, Malawi, and Zambia in the north-west, Zimbabwe to the west and South Africa on its southern borders. The east is guarded by the warm Indian Ocean. The country consists comparatively of almost sea-level coastal plains decorated by huge palm trees, rising to higher grounds towards the western region with it’s forested, grassy inland and mountain landscapes. Off the coastline are different sizes of islands, islets and coral reefs to be found.

The interior of the country is cooler due to the elevation, but the rainfall is higher too. Mozambique’s hot summer period is from October to March, but heavy rains can fall during January and February often accompanied with cyclones. April to September is the dry, warm winter season with cool evenings. 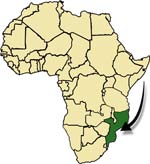 Rain gear is essential for the rainy periods. Otherwise cool, light material should be enough for everyday wear with something warm for the cooler evenings in the winter.

Due to the civil war, there are still some areas that have not been cleared of landmines. Care should be taken when moving outside the main tourist areas. Do not participate in exchanging money on the black market, as it is illegal and there are many con artists. If you have to leave your car unattended, take care to lock away all valuables out of sight. Ensure that equipment on open-vehicles are tied down, as several incidents of children jumping on the back of slow moving vehicles and stealing the equipment have been reported. Police officers often request visitors to show travel documents and passports and therefore visitors should always have it available. Abide by the traffic rules!!!

Foreign Currency including travelers’ cheques and cash can be exchanged at some banks and forex bureaus. It is best to use American Dollars to prevent high commission charges and bad exchange rates. Credit card usage is very limited except in the luxurious hotels. Declare all foreign currency on entry. Export of foreign currency is limited to the amount declared on entry.

Maputo is extremely expensive compared to neighboring countries. There are top luxury hotels in Maputo and Beira and one must often pay bills in foreign currency. Luxury lodges are also available on some of the islands. There are idyllic camping spots along the coast, with beautiful settings under coconut trees. Other accommodation range from basic to average.

Given the history of the country, the cuisine is often Portuguese with Far Eastern influences. Seafood, like crayfish and Delagoa Bay prawns, is a must and then there are some hot specialties like piri-piri chicken and matapa (a sauce of peanuts and cassava leaves). In the countryside, one must stop at bakeries and try the fresh round bread rolls. Meat is scarce and so are certain vegetables. It is best to arrive well stocked unless one stays at the luxury lodges that serve good dishes.

Shaking hands when the greeting is normal. Like in Portugal, it is customary to call people by their professional titles. Informal wear is allowed. Do not photograph sensitive areas including airports, police, any government buildings and especially not the bridge at Tete, crossing the Zambezi. Tipping should not be done in hotels, but 10% is normal in restaurants and for taxis.

Passport (valid for 6 months beyond intended stay) and a visa are required for most nationalities as well as travel documents/tickets indicating return or onward travel. Declare all currency when entering the country. An International Certificate of Vaccination for yellow fever is required if arriving from an infected area within 6 days of travel.

The country has some diplomatic missions in certain countries including:

The country is popular amongst fishermen for its swordfish, marlin and barracuda. Fly-fishing is also a favourite on some islands with calm waters. Water sports are superb due to a warm calm ocean with some fantastic reefs to explore along the coastline and around some islands. Swimming is very safe although there is the odd shark, but very few attacks have been reported. Diving is extremely popular due to the clarity of the water and many resorts have their own boats and diving equipment to rent.

Popular beach resorts include towns like Xai-Xai, Inhambane and Vilanculos.

Islands:
These fascinating islands are in Northern Mozambique and are connected to the mainland with a long bridge. Rustic churches, palaces and mosques dating back from as far as the 17th-century cover the island. It is difficult to get to this region by vehicle, but certainly should not be missed if you are in the vicinity.