Tanzania is internationally known for its spectacular wildlife and the iconic Mount Kilimanjaro. But the country is also fortunate to present exotic Indian islands like Zanzibar and Pemba that captivates the mind and inspires mystique. The age-old dormant volcano of Tanzania, the Ngorongoro conservation is outlined with green & grassy slopes while the bottom is a paradise for the wildlife. Ngorongoro boasts scenery that draws visitors to its inside to enjoy extraordinary explorations.

Tanzania is filled with Tourist Sites to explore, all wrapped in colorful landscapes in both the dry and wet seasons. With ever-growing fame, the destination is on its way to the worlds most desired wildlife reserves. The country developed with a union overseeing the old Tanganyika on the continent and the paradise island of Zanzibar just off the coastline. 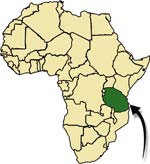 The Indian Ocean islands of Pemba, Zanzibar & Mafia are all part of Tanzania, located just off the east coast. Tanzania borders are dividing Mozambique & Malawi from itself, while Zambia is bordering the south-west side. On the western regions you will find the (DRC) Democratic Republic of Congo, with countries like Burundi and Uganda in the north-western ridges, while Kenya is sharing the African coastline on its northern borderline. Tanzania’s mainland is structured with semi-deserted landscapes, grassy fields, southern districts with high plateaus, thin coastal, the Masai Steppe are located in northern parts while spectacular mountain ridges are decorating north-east regions like Mt Meru and Kilimanjaro. On the highlands there are various lakes that where formed due to the Great Rift Valley.

The Tanzanian climate & temperature changes frequently, as it has the highest areas and the lowest grounds in Africa. The coastal belt tends to be consistently humid and hot, while the higher elevated regions tend to be cooler in comparison. The country has two rainy seasons, finding that the March to June seasons consist of long heavy rains (coming down in electrical storms) while the November to January season has shorter rainfalls. Tourist best travel time will be from September and March, its periods with awesome sunshine weather while the Serengeti plains are flogged with spectacular wildlife.

Required Clothing – What to Wear:

While the Swahili people are traditionally dressed from top to bottom, International travelers are relaxed on their vacation. So bring thinner tropical clothes, all year around its warm tropical weather, but on safaris and at night time it can get a bit chilly so warmer sweaters will do good. When you are in the country in the rainy seasons make sure you are guarded with efficient rain-gear. While animals are effected by colors we suggest that guest dress khaki colored clothing to prevent unnecessary disturbance in the wild.

Tanzania is a country known to be particularly safe for tourist. Unfortunately, travelers can’t just expect that they are in the safest hands of the law, things happen. It’s not necessary to be scared, just take care of yourself, family or partners. We suggest staying close to each other or if single, ask someone to join u when walking on the streets or shopping around. The bordering countries like Rwanda and Burundi we feel visitors should take care, always try to stay with your travel group or in the company of your registered guide. The African news brings up time to time incidents that happened in the countries, like small muggings in the past, but be assured the government officials stepped in with security matters. We suggest that if on a self-drive trip always be close to other travelers and their transport during journeys. On the deep open ocean waters sailors are mostly alone, pirates are from time to time still operating from Somalia so please be cautious. Because of these theft defaults, bad rugged routes, straying wildlife, be careful at nighttime. Try to be at your destination before dawn.

1 Tanzanian Shilling is equal to 100 cents.

Travelers foreign currencies (travelers’ cheques) are accepted by local banking institutions, forex bureaus and at certain venues, we advise visitors to bring US Dollars and British Pounds its mostly excepted by locals and businesses. Credit card facilities like MasterCard and Diners are accepted at most institutions where they can reach the network. It is prohibited to export or import local currency, but there are no regulations regarding foreign monies.

There are awesome places to stay at major tourist destinations starting from budget beach & safari lodges to the most luxurious inland & coastal hotels and for the backpackers and private self-drive tourist they can enjoy the cheaper and affordable campsites. Mostly the lodgings have their private dining areas or restaurants, serving local cuisine to western taste. In gateway towns like Stone Town, Dar es Salaam, Moshi, Arusha and other smaller towns local seafood dishes can be enjoyed at restaurants on excursions and day trips. An abundance of great tasting fruit is available. One should always buy bottled water or filter and boil it beforehand.

Shaking hands with the right hand is customary and do not receive or give anything with the left, because it is deemed rude. Want to know how to get locals exaggerated, then greet them in Swahili, by saying Jambo (meaning Hallo). Dress casually in towns and villages, while woman has to at least cover the body at normal standards. Beachwear are seen for private swimming wear at the resorts and lodges and not in the public eye. Photographing people is a sensitive topic due to the fact that many people do not want to be photographed and others make a living from it and will demand money for it. We suggest leaving the police, uniform security and military staff at ease, they are there for official purpose and that’s it.
Tipping is 10% in restaurants, but find out beforehand from tour-operators how much porters and guides should be tipped.

There are various diplomatic mission across the world including:

A passport (valid for 3 months beyond intended stay) and visas are required for most nationalities. Tickets and documents for return or onward travel might be requested. An International Vaccination for yellow fever is required if arriving from infected areas within 5 days.